Today I left Auburn, Indiana and headed way south to Vincennes, Indiana. The trip took four and a half hours, fifteen minutes more than Google Maps had predicted. That included a lot of construction sites and a stop for fuel at Plainville, Indiana. It was a small plain village.

I had fueled up at the Kroger store before leaving Auburn. I paid $2.489/ gal. of diesel with the three cent Kroger discount. It cost $2.499/ gallon in Plainville without any discounts. Diesel ranged from $2.55 to $2.34/ gallon along the way.

Google Maps had changed the route from what I had seen the night before. It had previously routed me south on I-69 to I-465 west, I-70 west, then south from Terra Haute. Today I was routed I-69 south to I-465 south, to SR 37 south. I remained on SR 37 for what seemed like a lot longer than the actual hour of stop and go construction and traffic lights. The road is a four lane divided highway. Sometimes the road narrows to a single lane and you pass through a lot of urban areas. The traffic was heavy all the way to Bloomington. At least it never gridlocked.

Once past Bloomington the highway opened up into the new stretch of I-69. I have never driven this before. The terrain is hilly, unlike the flatness of northern Indiana. there are sweeping vistas of farm country. There were no gas stations. My advice is to fill up before leaving Bloomington, if you think you might need fuel soon.

The Ouabache (pronounce Wabash, the French can’t spell) Trails Park parallels the Wabash River, (spelled the way it should be). It is a nice park with cabins, camping, and RV sites. The RV sites are very limited (35) but I had no problem getting a reservation through this weekend. It only costs $20/ night. The water is city treated water. I had filled up my reservoir at Brian and Michelle’s before leaving Auburn. I did not know what to expect and I had used up my water at the last place. I won’t need it here. The electric offers 15 amp, 30 amp and 50 amp service. There is plenty of shade on most sites. The cabins and RV sites are all at a very high elevation above the Wabash river. This is handy since the river is flooding at this time. The woods are thick and there are biking and hiking trails. The cicadas are very active at the moment. As I am typing this the familiar continuous droning can be heard even with the windows all shut and the A/C on. I find the sounds soothing. The A/C has not stopped running since I arrived. It is just that hot.

When I arrived I was confused on where to register. I concluded that I should have stopped at the park office. The young man there told me I could have registered with the RV Park hosts. They occupy a site in the park. I registered at the office and located my site. I have been told by several people that it is the most desirable site in the park. It is wide and has a large oak tree and ash tree for shade. Site thirteen must be lucky.

Trail Eight Under the Railroad Tracks 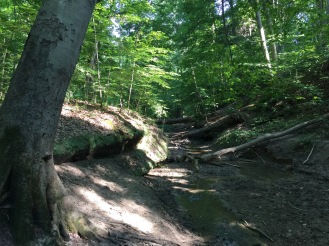 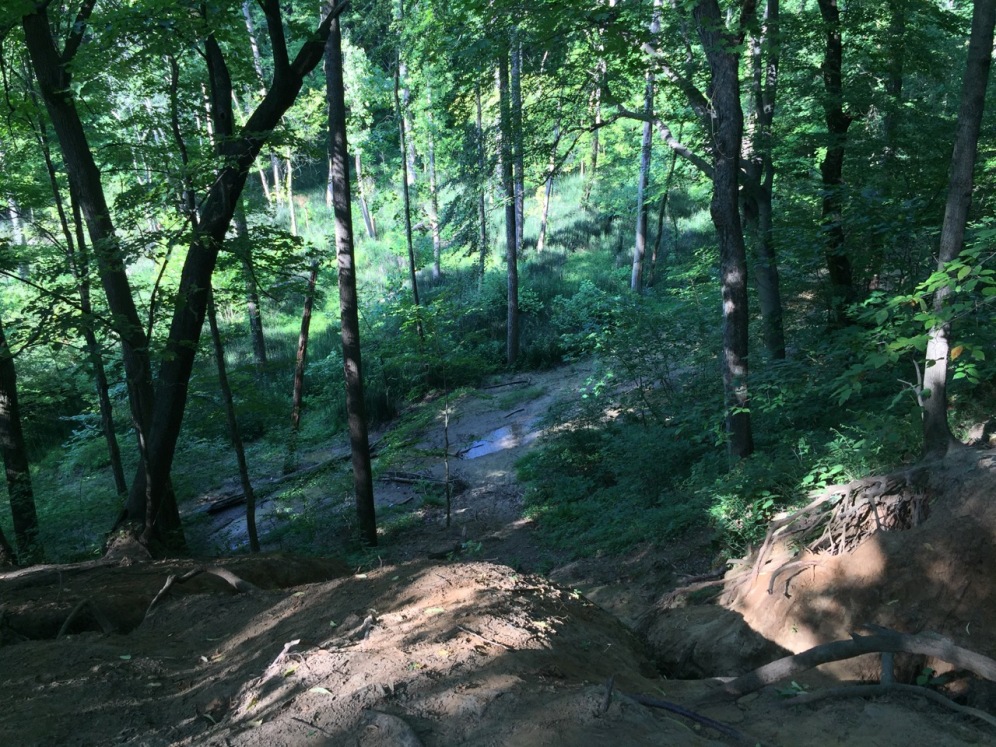 I hiked for about an hour today. It was 95 degrees and 57% humidity with a heat index of 100 degrees plus. The Wabash river is isolated by a train track that cuts parallel to the river. The only way to get to the other side is on trail eight which goes under the tracks through a tall drainage tile. The drainage tile is being used for drainage at the moment and is impassable unless you care to wade. From what I could see, the railroad was acting as a dyke for the Wabash River. There would have been no dry land on the other side of the tracks. I hiked trails four and five up steep rolling hills and down again into a series of drainage ravines and across some bridges. The thick trees offered a lot of shade but little relief from the heat and humidity. By the time I got back I was soaked in sweat.

I had made two eggs and turkey bacon for breakfast. I topped that off with a cup of coffee from The Cupbearer Cafe. I briefly visited with Macie while she was working there. I skipped lunch but ate a protein bar as I drove today. I also ate some peanuts and a snack bar. Tonight I cooked a cheeseburger on my Coleman stove (outside), and had a salad too. I watched Wheel of Fortune and Jeopardy while I ate.

I was so sweaty that I decided I had to shower before I could consider going to bed. I discovered that a screw had loosened up on my shower doors and the doors were completely off the track. This explains how one of the guides had broken before. I wrestled the tools out of the side compartment under the expansion and repaired the shower doors as best I could for now. The screw is stripped. I will have to get a replacement tomorrow. It was even more difficult to put the tool bag away. While ducking down I hefted the bag under the expansion and into the compartment. I then rolled it sideways and pushed it back to make it fit.

I enjoyed the shower and felt much better. It is dark now. The cicadas have been replaced with the sounds of katydids, and crickets. The A/C shut off for a brief time but is running again. It is late. Time for bed.