I fulfilled my goal this past Thursday. I paid a visit to the Red Skelton Museum of American Comedy. It is located at 20 Red Skelton Blvd. Vincennes, IN. They do not open until 10:00AM. I was early so I ran some errands and stopped for a coffee at a local coffee shop, I’Mpressed Coffee Company 1427 N. 6th St.. It is a small shop but it was recommended by a local. Locals often know best and it was good coffee.

I arrived back at the museum shortly after 10:00. I first checked out the concourse around the attached Red Skelton Performing Arts Center. There are many memorabilia located in the outer area including cement foot steps of Red Skelton, and Charlie Chaplin. The large bust of Red sits in a prominent spot towering above some cushioned seats. He is depicted holding his trademark cigar.

Red was born in Vincennes and always claimed it as his home town. He left for the stage at fifteen years old and kept going. I know Red Skelton from his movies and TV show. I have also been entertained by the replaying of his radio shows. Nowadays you can do a search on line or You Tube and watch selected skits or shows.

I entered the museum around 10:30 and did not leave until I had watched, read or listened to everything available. Most people were there a little over an hour. I stayed for four hours. There is a short introductory film when you first enter. It offers a biography and some insight into American comedy. Don’t skip it. Take the little time to watch it.

A time line hangs near the entrance showing world events in relation to Red’s career. The museum is both chronological and informational. There are numerous interactive displays. A radio broadcast can be listened to in front of an old period radio. Red made 39 movies in his career. His TV show ran for twenty years. When it was cancelled it was still in the top ten listings.

Kids will probably like the interactive parts of the museum the best. There is a dance step with numbered foot prints accompanied by sound effects. I may have stepped through it while no one was watching. There is a radio sound booth that allows you to add sound effects to a radio broadcast and then replay it. In another area, a green screen allows you to become part of a broadcast encouraging you to mimic Red’s actions.

I especially enjoyed reading the exerts from Red’s joke books that were kept by his first wife, and subsequent manager and writer, Edna Stillwell. They were not all choice but they were characteristic of Red’s style. 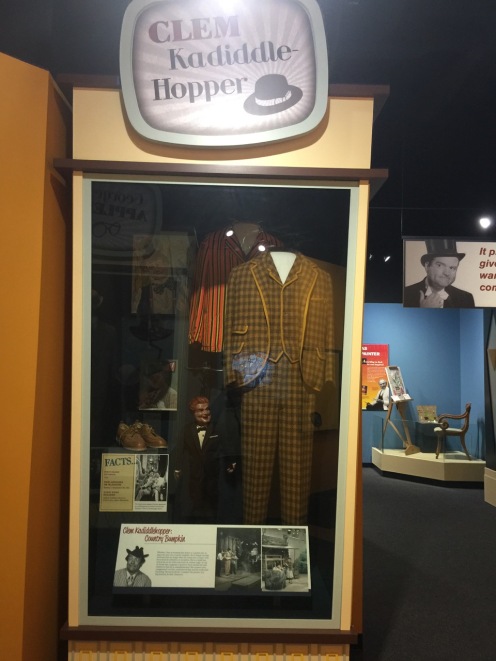 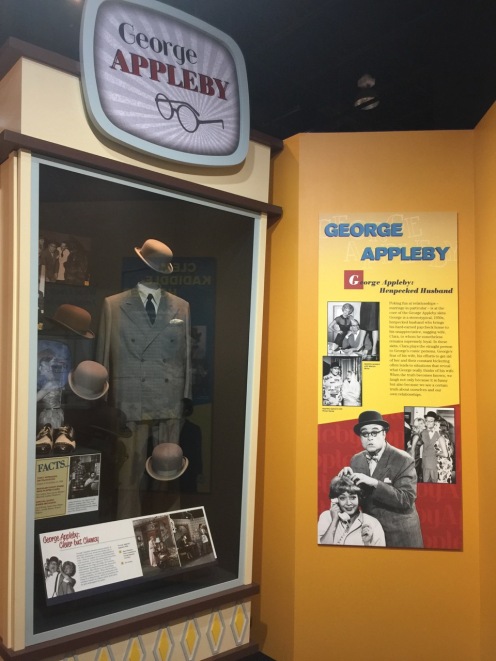 Another favorite part of the museum were the character displays. Freddy the Freeloader, Dead Eye, Clem Kadiddle-Hopper and all the other character’s clothes and props are on display. Each display is accompanied with a clip of the character from the TV show, photos, and a description of the character, including stars who appeared on the show with them, like Vincent Price, Lucille Ball, Harvey Corman, and others. 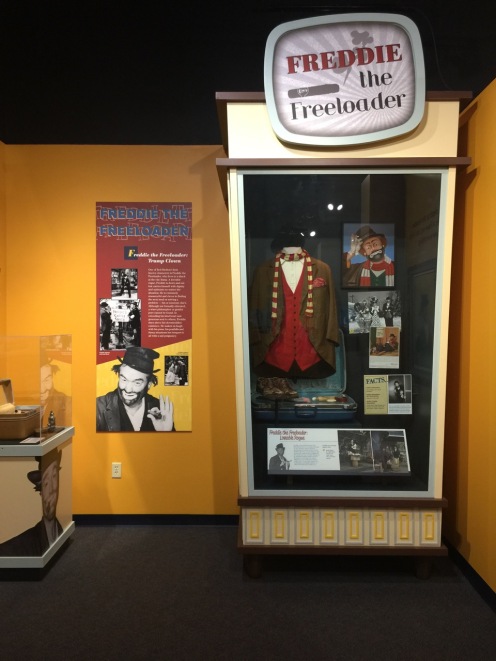 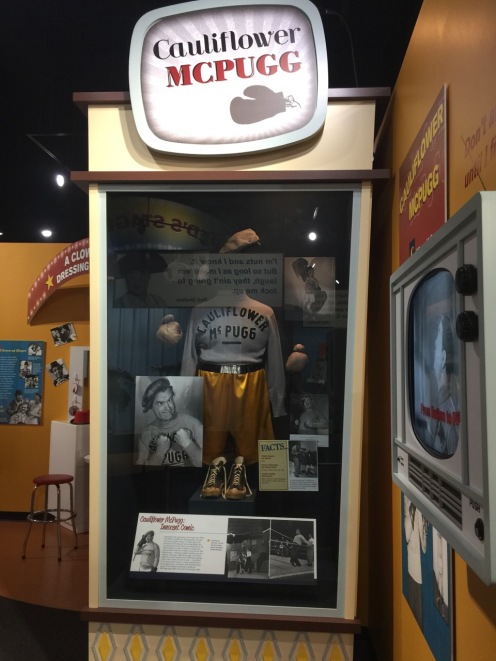 Red was active in and served with the military as an entertainer. He was a patriot and is well know for his recitation and explanation of the Pledge of Allegiance. The video can be viewed near the exit. You will also pass some of his art work. He painted a lot, mostly clowns. His association with clowns is also spotlighted in the displays on the way out. He was known as “One of America’s Clowns”, a title he wore well. 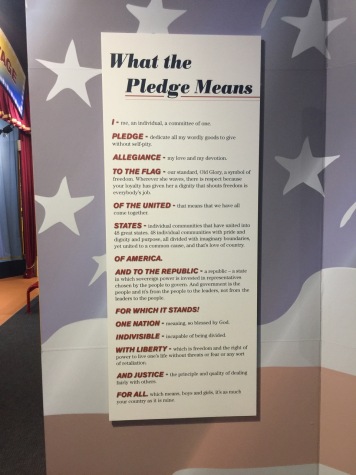 What the Pledge Means 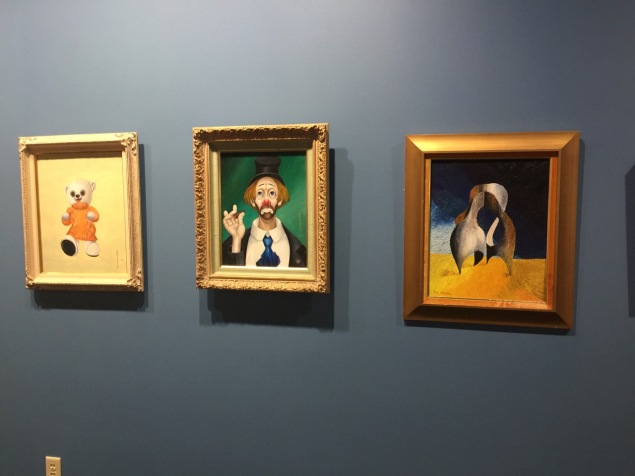 You will enter and exit through the museum store. There are the usual mugs, T-shirts, etc.. I bought a “Gertrude and Heathcliffe” joke book written, and illustrated by Red Skelton. It seemed like one of the more unusual items that were offered. 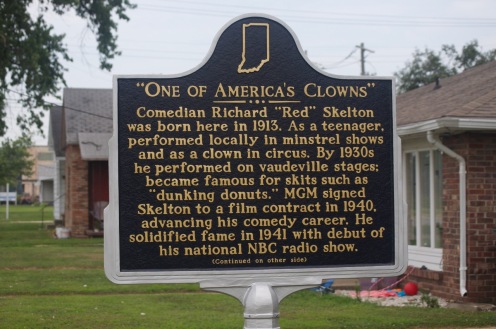 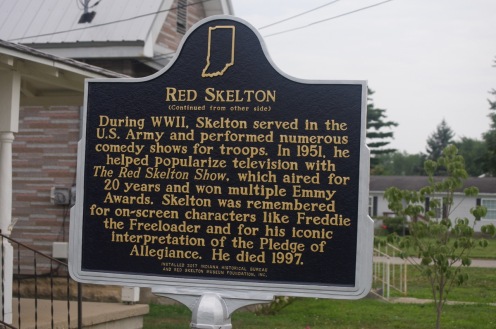 The house where Red Skelton was born sits across the parking lot from the museum on 111 Lyndale Ave.. The road runs parallel to Red Skelton Drive. A historical marker denotes the site. There are other sites associated with Red Skelton around Vincennes such as The Pantheon Theater (currently under renovation), and the Fortnightly Club, where Red had performed on stage. For a full listing, visit this site: http://redskeltonmuseum.org/vincennes-sites/ .

Make the trip to Vincennes see the sites and make the Red Skelton Museum of American Comedy a priority. I think you will enjoy it.