I left my friends in Chattanooga on Sunday March 18th. Travel from Chattanooga (Wildwood, GA actually) to Vicksburg was a straight shot on the Interstate, I-24 west to I-59 south to I-20 west. I crossed Georgia, and Alabama under gray skies. The gray skies turned to heavy rains as soon as I crossed into Mississippi. At times the downpour was so intense I saw cars pulling over or at least slowing down. I was not impervious to the weather’s effect. Sitting high in my RV with the windshield wipers on full speed helped but the visibility was reduced to that of a dense fog. Deep into Mississippi I saw two vehicles with trailers that had left the east bound highway to become buried up to their axles in the median. A state trooper was on the scene. I don’t think there were any injuries.

Along the way I monitored my fuel consumption but somehow the gauge had dropped to the dreaded one notch and the low fuel indicator chimed on. I was still in Alabama with only eight more miles to the Mississippi border. I had seen the price of diesel range from 2.59/gal. to 2.79. In Mississippi I took exit 165 and went north to a Sunoco station on Will Garrett Rd. They did not sell Diesel. I about faced and crossed over I-20 pulling into a Love’s station. The diesel was 2.75/gal.. Every pump was backed up with a line waiting to fuel up. I queued up for ten minutes before reaching a pump. There was a pickup truck at the pump with nobody in sight. A car was between us but they moved to another pump. When the pickup’s driver came out He grabbed the nozzle and started to fill his tank. I guess he had to prepay. All I could do was wait. I was glad that he did not waste any time in leaving after he had finished. I moved up, filled up, and was gone in five minutes.

The rains slowed to a drizzle before I reached Vicksburg. I headed south off I-20 taking exit 1A to the left onto US 61. I had reservations at River Town Campground 5900 Highway 61 South.
The RV camp was six miles ahead. As I approached my destination Google maps was directing me to turn left and take an approach that did not make sense. There was no place to cross the median at the campground entrance so I passed it and turned left at the next intersection (Redbone Rd.) where I did a u-turn. In the meantime Google was exhorting me to turn onto Redbone Rd.. I ignored it. 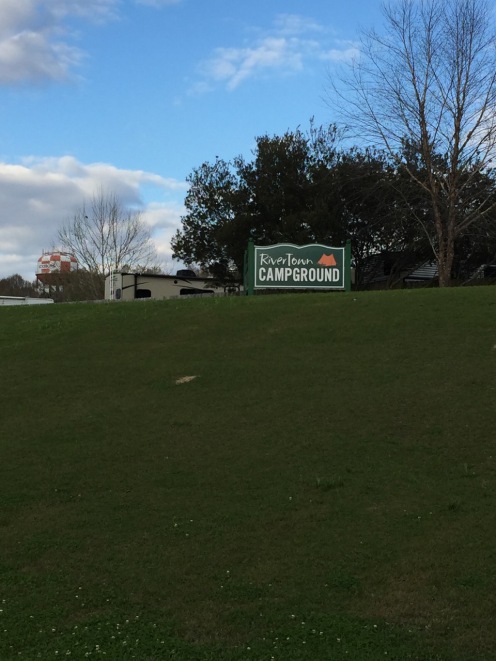 The check in was easy and fast. The camp hosts are Dave and Joanne. They were very nice and personable. I was assigned to a pull through slot site 57. There are 108 sites and 58 are pull through. The other 50 are back ins around the parks permitter. The hook ups are in the far rear of the site. I pulled in, disconnected the car, pulled the car to the front then backed into position at the far end of the gravel pad. The stone is well packed and leveled. Since it had rained, the thin grass was muddy. I put out my mat to reduce the mud in the RV. I connected the water and electric. There is a cable TV connection hanging loose but cable is not offered. I connected my small digital TV antenna and programmed the TVs. I get 17 channels. There is hardly anything worth watching anyways.

My ten feet long sewer line was ten feet too short. I needed to get a longer hose. I took care of that on Wednesday when I felt I should dump the tanks. Walmart was a bust. They offered a few hoses but nothing I could use. After further checking around, including another campground and the Home Depot I decided that I would have to drive forty one miles to Camping World in Jackson, Mississippi. It was interstate highway the whole way. I got my part, returned to the site, hooked up the hose and flushed the tanks. Mission accomplished. But I lost a day of sightseeing.

I was glad to find a Kroger grocery store nearby. In northern Indiana and Ohio Kroger is dominant. I have always been happy with their selection of meats and produce. It is the same here.

I spent the past two days touring the Vicksburg National Military Park. I learned that there are monuments and markers everywhere within the park. Some of them are inaccessible. You can see the red or blue placards through brushes or on a distant hillside. I wondered how often those are actually read. The history extends well outside the park. Monuments, markers, statues, busts, historical buildings, and scenic roads permeate the city. I will post details about the Military Park in a separate post.