Many know the of Brothers Grimm, famed for gathering folklore and fairy tales from the German speaking people. Their gory stories would leave a child quaking sleeplessly if read in the original form. The city of Berlin boasts about being the final resting site for the four brothers and their parents. Unfortunately they don’t make it easy to find the graves. Neither does Google Maps.

Google Maps would have you believe that taking the S1 local subway train to Yorckstrasse will lead you on a brief walk to Katzierstrasse, left at Grossgörschenstrasse, right onto Hochkirchestrasse and then up a little ways to Saint Matthäus Church. There you are.

The directions should read, turn right onto Grossgörschenstrasse. At the dead end the entrance to the cemetery will be on your left. Also, When taking the S25, or S26 to Yorckstrasse, it is good to remember that these two lines are separated from the S1 line by a good 200 meters, and the rail lines are not visible to one another at a glance from Yorckstrasse.

I had the additional pleasure of being a tour guide for Elsa, my girlfriend’s friend from Russia. She does not speak English, and I do not speak Russian. I speak some German. Elsa speaks even less. We had a very quiet day.

By taking the S25 from Südkreuz I had added at least three miles to the short walk. My phone would not connect to the Internet through the local cell towers so I had to rely on screen captures taken of Google Maps. The names of the streets were not visible on the maps and the separate rail lines were not shown. This complicated things and led me to a park that looked promising, even though there was no sign of a cemetery. Somewhere along the line I had crossed from Schöneberg to Kreuzberg district. After climbing a hill in a large park, (Viktoria Park) , we passed a waterfall and found a wooden cross with a commemoration stone to 17 Juni 1953 (June 17, 1953) . This was a bloody day of protest against the DDR that was forcefully suppressed by the Soviet regime. It was not what I had come looking for but it was a worthwhile find. The cross stands on a hillside overlooking an open area in the park. It is very unassuming and easily missed. I was glad I had found it.

I had to assume that I was in the wrong place and decided to ask a couple of young women for some help. They spoke some English and I gathered that we needed to exit the park onto Monumentenstrasse, cross a long bridge and turn right (they argued whether it was left or right), then go up a ways. I thanked them and we headed off.

Everything made sense up to the point of “heading up a ways”. Soon we were back on Yorckstrasse. That is when I discovered the difference between S1, and the S25, S26 stations. We crossed under the S1 line. I knew it could not be right. I stopped a middle aged couple and asked if they could help me locate the Brothers Grimm burial site. Although they were from the area they did not know that the brothers were buried near by.

The man consulted Google Maps on his cell phone and directed me to the fore mentioned location. I thanked them and we started on our way again equipped with street names this time.

It was adding up as we ambled along. My hopes were high but they ended when we reached the end of Hochkirchestrasse at Monumentenstrasse. It seemed that we must have passed the entrance to the cemetery, yet there was no obvious entrance.

A man was washing the windows at a corner bike shop. I asked if he knew where the Brothers Grimm were buried. Again a local person had no idea that they were buried in Berlin, let alone nearby. He asked his friend, the bike shop owner. Neither one had a clue. He suggested that we were in the wrong area. Maybe it was near Potsdammer Platz. I knew better, thanked him, and headed back towards Yorckstrasse.

Just on a whim, I decided to visit the dead end on Grossgörschenstrasse. Jackpot! I saw a small chapel and a painted fence depicting scenes from Grimm’s Fairy tales. We entered a gateway, then circled the chapel looking for signs to show the way to the grave sites.

Berlin is doing a great job of hiding the graves of the Brothers Grimm. There were no indicators to direct us to the graves. I used a photo from the Internet to match the buildings in the background to the surroundings. It drew me to the top of a hill but no closer. 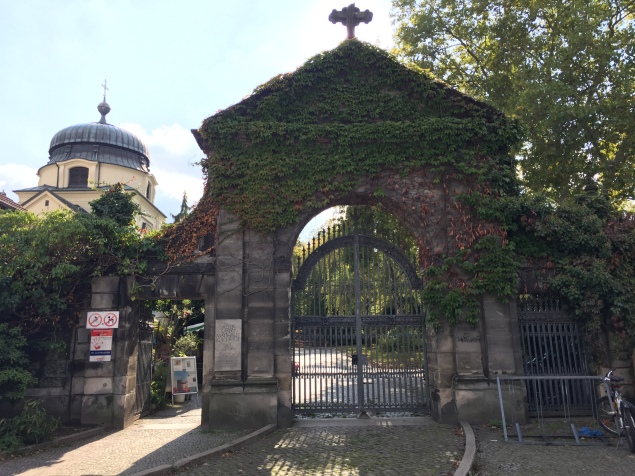 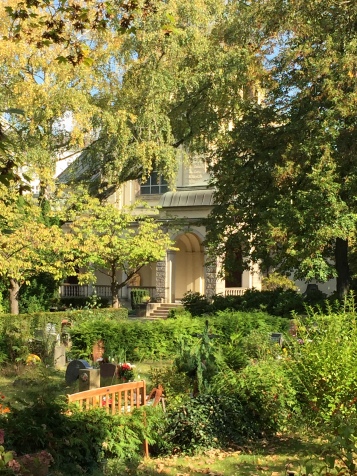 A young caretaker was raking leaves. He directed me in a general area that homed us in. I spotted a Grimm family plot but it was the wrong family. I was feeling defeated yet I could not give up. I was too close. At that moment, Elsa shouted my name. She had found the tombstones. The search was over. 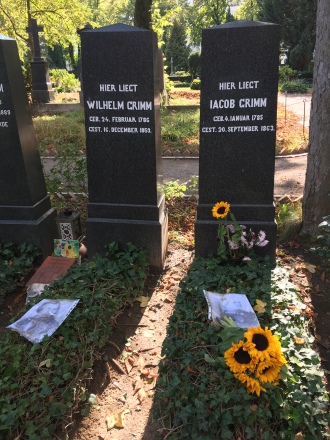 The Family Plots of the Brothers Grimm 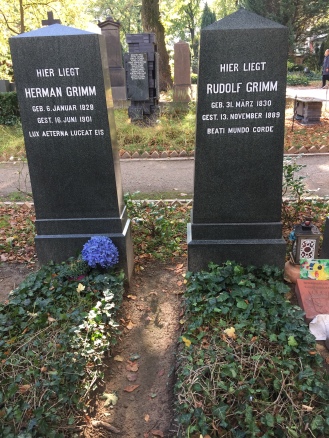 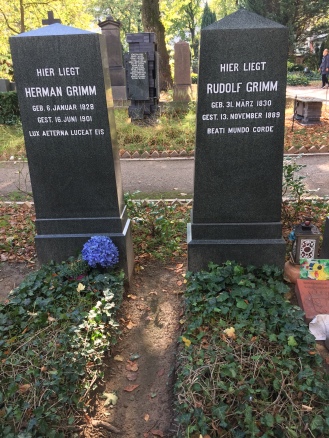 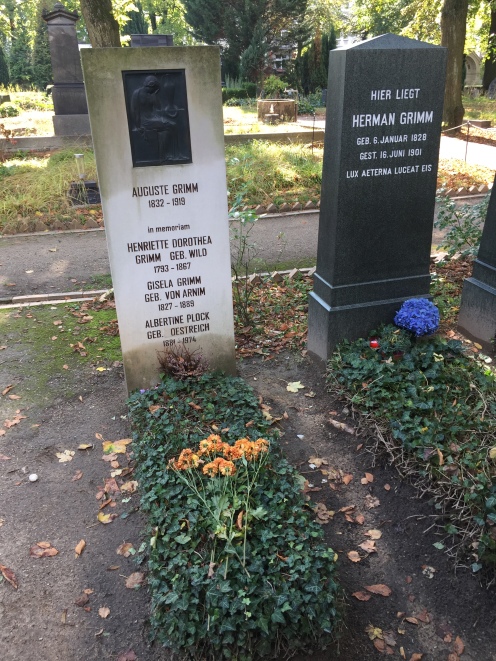 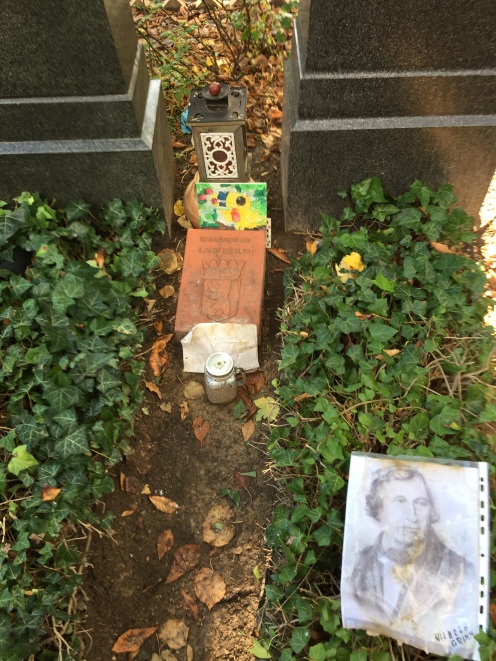 We stayed ten minutes to pay our tributes, and to take photos. We left with our heads held high. Despite all efforts by the city and Google Maps, we had found the graves, and it only took us one and a half hours.

If you find yourself searching for the Brothers Grimm grave sites follow my directions. Google Maps will get you in the general area but leads you astray. Enter the graveyard by the stone gateway. This will lead you in to the right of the chapel, near the main entrance to the chapel. Turn right past the chapel, then left onto the next walkway. Before reaching the top of the hill there will be grave sites against a wall on the right. Before the crest of the hill, the four large black Grimm Brothers gravestones will be on the left in a perpendicular line to the walkway.