Lately I have not had much to write about. I spent my days as a volunteer at Ottawa National Wildlife Refuge in northern Ohio. I worked 2 days a week at the visitors center and one day for maintenance. I enjoyed the remote refuge. The evenings in the marshes were very quiet. The clear skies along Lake Erie were filled with stars.

While at the visitors center I greeted people and answered questions about the refuge. Usually visitors would want to hike and bird watch. There are plenty of hiking trails surrounding the many ponds on the refuge. It was just a matter of finding out what they hoped to see and directing them to the proper areas.

One of the main attractions is the large bald eagle population. This is the place to see them. I would spot two to five eagles every time I went out. They nest on the properties and I can point out three successful nests within a small region. Many people mistake the juveniles for golden eagles or other birds. The juvenile bald eagles are mostly black and will not display the characteristic white plumage for several years. This time of year they are widely scattered around the refuge and often hunt on the adjoining properties.

Magee Marsh abuts to the refuge along the eastern edge. It is state owned and operated. It offers an extensive boardwalk that protrudes into the marshland amidst a thick canopy of trees and brush. I often send people there for a different view of the wildlife area.

Sunrise over the Show Pond

The Ditch along the South Woods

There are two other national wildlife areas available to the public in the vicinity. Metzger Marsh is a continuation of ONWR, and Cedar Point (not the amusement park) is located just northwest of the property. They both have limited access but they offer the wildlife a chance to thrive with limited human activities. In all the three properties cover nearly ten thousand acres of reclaimed wetlands.

I walked to and from work if the weather permitted, and it usually did. While walking the trails through the south woods I was treated to a choreography of leaping frogs as they cleared off of the path and leapt into the water filled ditch. Most of them were leopard frogs. On occasion a bull frog or large green frog would make a large plop into the ditch. I saw plenty of egrets, blue herons, and scared up plenty of wood ducks. On colder mornings I could see the pollywogs pushing up from the bottom of the ditch, breaking the water surface only to descend again. It was a smooth bobbing action. I don’t know if they were breathing or feeding. It was an interesting site.

When I walked the raised gravel trails to the visitors center I often saw deer in the early morning. I often saw a single doe with three fawns. One morning a fourth fawn had joined them. I don’t know if there was another doe that I could not see. When they broke off three fawns ran with the doe and the fourth went in another direction.

One evening I went for a walk toward the beach along Lake Erie. It is a straight shot north of where I stayed. A road T’s in from the east about a quarter mile from my RV. As I approached that road a coyote emerged from the ditch. I stopped. He stopped. I waited and he took off running east down the side road. He repeatedly glanced over his right shoulder then back at the path in front of him until he was out of site. He wasn’t about to lose site of me until he felt safe. I am pretty sure it was a hybrid coyote. His shoulders were broad and he stood taller than an average coyote. He was an impressive creature. 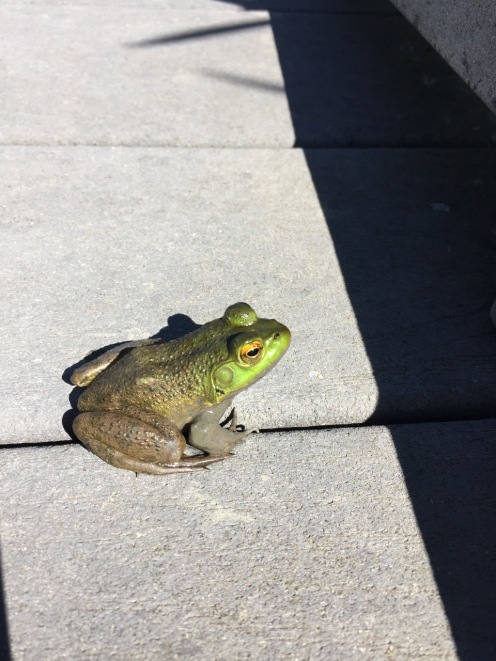 A Frog Captured with Kent’s Assistance

There are plenty of activities for kids at the refuge. On two separate weekends I was visited by 6 year old Spencer and his brother 4 year old Cayden. Their grandpa Ken brought them up one weekend and their dad Kent brought them another weekend. Their favorite thing to do was looking for frogs and snakes. We checked out two backpacks from the visitors center and some nets, and caught a frog and a tadpole. It was very exciting. The boys were also excited to see a large fox snake and a lot of small fish. We netted one small bass. It was a blast and the boys learned something.

I have left the refuge to house sit for some friends. I don’t have a site to spend the winter yet. I will find one. After all, everyone has to be somewhere. I would have wintered at ONWR but I don’t care to winterize the RV. That is a process that limits the functionality of the water usage. The fellow workers at ONWR will be missed. I look forward to seeing them again next year.
I am using this time to clean the RV, check it out, and perform any repairs. No matter how new or old an RV is, something will need some attention. It’s a house on wheels and the roads are rough.

I am also addressing some health issues (nothing serious). The biggest health issue I have is the quality and cost of the insurance. I am trying to secure healthcare insurance that will travel with me no matter where I go. The choices are costly and limited. I may only have one possible company that I can sign with for national coverage. Most of the companies have ditched the unprofitable mess that congress has created. Too young for Medicare, too rich for government assistance. Too rich by some arbitrary scale devised by a group of lawyers who give themselves, and their staffs a pass on healthcare. Suffice it to say, I pay more than “my fair share” for substandard coverage.

I plan to hit the road to visit some friends and family again soon. After that I will head south. I will keep the blog posted.

One thought on “Everyday Life”