The meaning of life, the universe, and everything has been solved. Forty two, right? Beyond that lies the mystery of coffee.

I stopped at a coffee shop to contemplate the depths and varieties of coffees. Coincidentally I stepped into “Hipsterville”. The wide open floor space of the cafe held six tables three with single occupants, two with duo occupants, and one with four. The solitary couch accommodated a young girl and her younger brother who were engaged in a card game with a man (presumably their father). The father sat in a kitchen styled chair across from the kids using a coffee table between them to place the cards. A heavy wooden over sized desk light shines down on the couch like an interrogation lamp straight out of film noir. It can be purchased for eight hundred dollars. 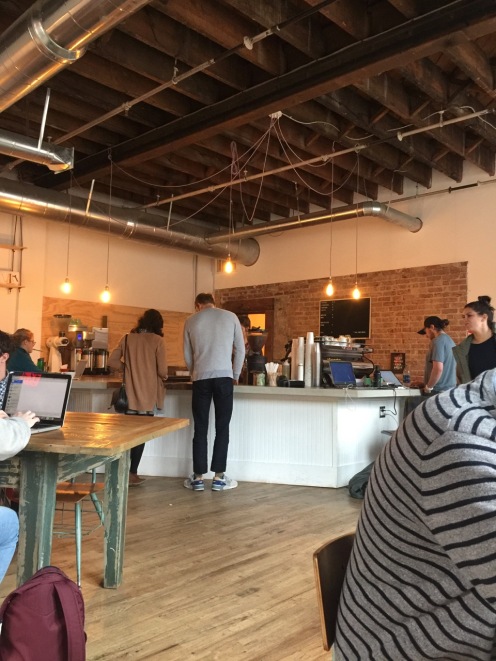 Interior of Coffee Plus

All around were 20 somethings engaged in talking, reading books and, tablets, or phones, or typing on computers and other devices. I was the odd (sixty year old) man out. The shop could easily hold a lot more tables and chairs but that would ruin the open atmosphere of the tall ceilings, exposed native timbers, and shiny aluminum heating ducts. The main lighting is supplied by five brightly glowing bulbs suspended by mauve cords above the long bar. Two other bulbs provided ambiance along the edge of a series of suspended shelves held up by knotted ropes. The bar is broken into three straight segments two short pieces which protrude from adjacent walls and the third that completes the segregation of the corner where the barista works isolated from the rest of the room. Chairs allow three individuals to perch at each end of the bar while the employee serves others in the middle segment. Acoustic music drifted from somewhere behind the serving area accompanied by a tenor ranged male voice heavily augmented with reverb. It was quiet like a 1960’s library. When people did speak they used hushed tones.

I stepped up and asked what was good. I was greeted with a smile and offered a menu with limited selections of coffee. The menu offered a few more items than were presented on the wall hung chalkboard. I ordered a “Miel”. It is a latte with cinnamon. It cost six dollars. Normally they offer a wide assortment of pastries. Being a Sunday the selection was a slice of pumpkin or apple pie. I preferred a muffin so I passed. I was told I could take a seat and she would bring me the drink. I offered a tip. She thanked me but no tips were accepted. Maybe the tip was included.

The only available seat was one of two situated against an outer wall with an end table between them. I took the seat and waited for the barista. There was barely time to open the phone and read a news story before the drink arrived. I complimented the worker on the drinks presentation. It was a full cup with a tulip design in the foam. The cinnamon and coffee blended into an aromatic delight. I could breath in the flavor before tasting it. It was wonderful. I enjoyed the quiet time and clean surroundings while sipping the latte. It was a good place to chill.

If you are ever in the Chattanooga, Tennessee area stop in at Plus Coffee 3800 St. Elmo Ave.. The business is in a triangular patch sandwiched between Tennessee Ave, St. Elmo Ave., and W. 38th St.. Much better than the chain operations.